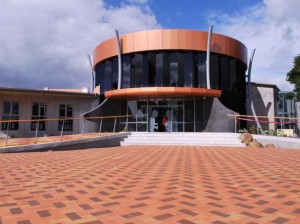 Jaycee Park was rejected early, given the community’s response to the importance of maintaining the open green space.

Redan Road / Commerce Street site had some appeal but presented some significant issues, particularly around flooding and the limited scope to increase the facility footprint to allow for future growth.

South Road was the site most preferred as it allowed for future expansion and it quickly became apparent that a vision to create a single recreational, educational and cultural hub could be realised at that location. Also, it would develop the south end of town.

The total cost of the project, including landscaping, is estimated to be around $15m.

Other potential funders are in the process of being approached.